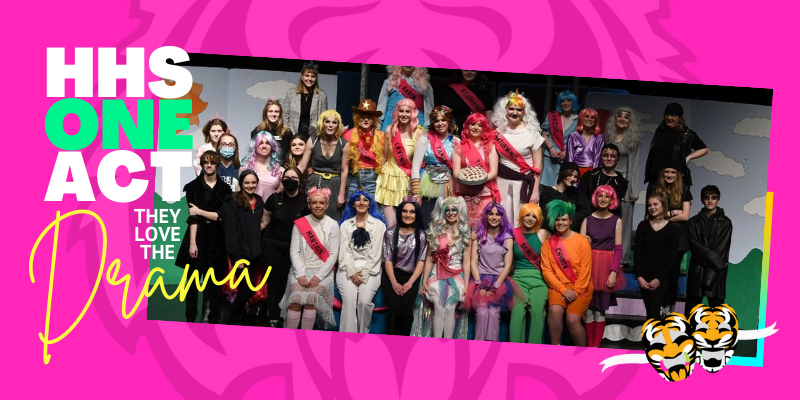 HHS One Act: They Love the Drama

For years the skill to perform a play has been utilized to entertain thousands. Typically consisting of many acts, most plays go on for hours. But what if you put one on in a single act? The one-act is a production that occurs every year at Harrisburg High School. The final product is always entertaining; many people show up to watch the play. Though the high quality of the plays drives the question: what makes these shows so excellent? The answer is quite simple: rehearsals.

Rehearsal processes can vary greatly depending on the cast, crew, director(s), play, and much more, but at Harrisburg rehearsals typically begin in the same manner: with a warmup. Claire McElroy, the head acting coach who runs said exercises, gave a brief description of what they encompass: “The purpose of warm-ups is not only to give actors a chance to warm up their bodies and voices, but to create a familial atmosphere in the theater.” Warm-ups include a portion where people get into groups and discuss a conversation starter, and then they move into a game. Emily Huggins, a member of the Goth Army in this year’s one-act, put warmups this way: “They allow people to get to know each other better and develop relationships with people that have common interests.”

Following warmups, the director, Michael Smith, comes on stage and gives general notes from the rehearsal the day prior. The cast accepts the notes and prepares for practice. This year’s one-act is “My Little Titus Andronicus,” a show about off brand versions of the characters from My Little Pony putting on the Shakespearean play, Titus Andronicus. For instance, a few actors are Early Evening Glimmer, played by Claire McElroy; Pixie Poo, played by Ryan Peltier; Grapejuice, played by Mackenzie Fischer; and Snowspray Flash, played by Abigail Beaumont.

Furthermore, practices typically run very smoothly. All participants act their part and rehearse the way they want to say their lines. It is a place of discovery for actors to find their character and have fun. The practices teach a valuable lesson: time utilization. In the final competition, the cast and crew only have 45 minutes, which includes getting all of their set pieces on and off stage. This process continues every day until it is show time. Natalie Inskeep, a junior who plays Moonshadow, said this about rehearsals: “My favorite part of the rehearsal process is when you can run the show over and over and are comfortable with it. It's my favorite because then I am confident, and I don't have to stress as much.”

All in all, the rehearsal process is a lengthy and stressful procedure, but the hard work and dedication applied by all members of the cast and crew make it worth it in the end. They prepared for their performances in Harrisburg on January 31st, February 1st, and the final competition takes place in Rapid City on Thursday, February 3rd.

After their performance at State, the cast earned a Superior play award, the best a school can receive. In addition to the overall play award, the following students received an outstanding performer award, which celebrates some of the lead actors who excelled: Abigail Beaumont, Ainsley Plack, Avery Bechtold, Carson Hefty, Claire McElroy, Jocelyn Nichols, Kyra Johnson, Makenzee Fischer, Noah Norwhine, and Ryan Peltier.